The Outbreak of Hostilities | OverSoul

The Return of Operation Bridgewater
Men and women of Shirō, all of the elements that form 'The Destroyer's Data Mining Project, Actualized in Christ', are now under the aegis of OverSoul at Project OverSoul, a.k.a. Operation OverSoul. The schedule for Spring 2022 is called Dreamtime.

More importantly, today I am compelled to address a very important matter which concerns a recent instance of 'Satanic panic' that was reported on February 11, 2022.
Inside world's worst 'satanic panic' case where parents were jailed and pushed to suicide over ritual child abuse claims - TheSun.co.uk

The message is simple: Men and women of Shirō do not fear Satan.
Project OverSoul | Dweller at the Threshold

The seventy-two returned with joy and said, “Lord, even the demons submit to us in Your name.” So He told them, “I saw Satan fall like lightning from heaven. Behold, I have given you authority to tread on snakes and scorpions, and over all the power of the enemy. Nothing will harm you. Luke 10:17-19 (BSB)
The Malleus Maleficarum of Al Wiggins Jr. | Matthew 6:6 (ESV)

And I saw an angel coming down out of heaven, having the key to the Abyss and holding in his hand a great chain. He seized the dragon, that ancient serpent, who is the devil, or Satan, and bound him for a thousand years. He threw him into the Abyss, and locked and sealed it over him, to keep him from deceiving the nations anymore until the thousand years were ended. After that, he must be set free for a short time. Revelation 20:1-3 (NIV)
Shiro | Mark 3:29 (NIV): Apollyon of Shiro | The Celestial Confluence at Shiro


"Put on the whole armor of God, that you may be able to stand against the schemes of the devil. For we do not wrestle against flesh and blood, but against the rulers, against the authorities, against the cosmic powers over this present darkness, against the spiritual forces of evil in the heavenly places. 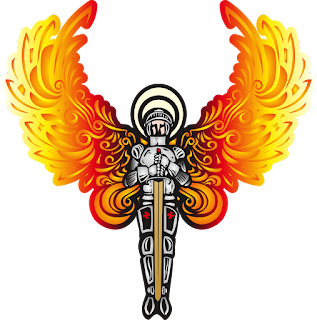 Therefore, take up the whole armor of God, that you may be able to withstand in the evil day, and having done all, to stand firm. Stand therefore, having fastened on the belt of truth, and having put on the breastplate of righteousness, and, as shoes for your feet, having put on the readiness given by the gospel of peace.

In all circumstances take up the shield of faith, with which you can extinguish all the flaming darts of the evil one; and take the helmet of salvation, and the sword of the Spirit, which is the word of God, praying at all times in the Spirit, with all prayer and supplication for all the saints." Ephesians 6:11-18 (ESV).

Apollyon: Archangel of the Apocalypse / Patron Saint of Shirō & Keeper of the Pit | Revelation 9:11

The first woe has passed; behold, two woes are still to come. Revelation 9:12 ✝